In 1982, Donald (Don) Brinkman began working for the Royal Tyrrell Museum as Curator of Vertebrates. He was then Director of Preservation and Research for a decade, until his retirement in November 2018. Don continues to study how ancient animals lived in their environments during the Age of Dinosaurs, with a focus on turtles. By comparing turtle specimens from Asia and North America, he investigates why some species lived where they did, what unique traits helped them survive, and how environmental conditions affected them. This research allows Don to determine why some species survived catastrophic events, while others did not. 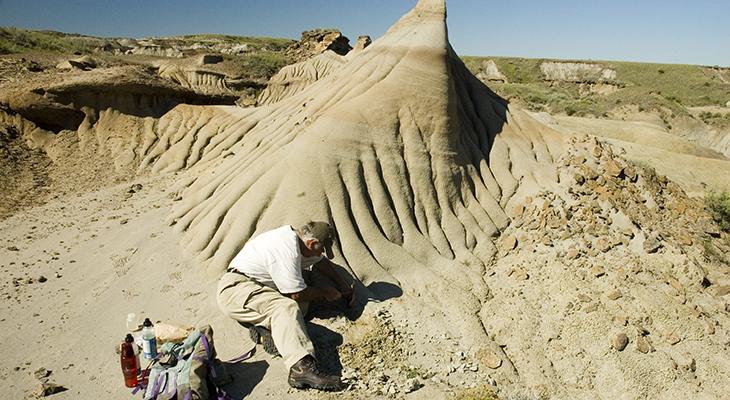 Vavrek, M. J. & Brinkman, D. B. (2018). The first record of a trionychid turtle (testudines: trionychidae) from the Cretaceous of the Pacific coast of North America. Vertebrate Anatomy Morphology Palaeontology, 5. http://dx.doi.org/10.18435/vamp29336

Murray, A. M., Zelenitsky, D. K., Brinkman, D. B. & Neuman, A. G. (2018). Two new Palaeocene osteoglossomorphs from Canada, with a reassessment of the relationships of the genus †Joffrichthys, and analysis of diversity from articulated versus microfossil material. Zoological Journal of the Linnean Society, 183(4), 907-944. https://doi.org/10.1093/zoolinnean/zlx100

Brinkman, D. B., Newbrey, M.G. & Neuman, A.G. (2014). Diversity and paleoecology of actinopterygian fish from vertebrate microfossil localities of the Maastrichtian Hell Creek Formation of Montana. In, G. P. Wilson, W. A Clemens, J. R. Horner & J. H. Hartman (Eds.), Through the End of the Cretaceous in the Type Locality of the Hell Creek Formation in Montana and Adjacent Areas (247-270). McLean, VA: Geological Society of America.